Let’s stay with Peirce’s example of abductive inference a little longer and try to clear up the more troublesome confusions tending to arise. 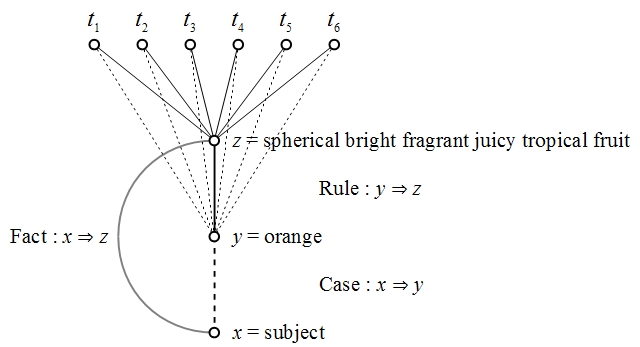 One thing needs to be stressed at this point.  It is important to recognize the conjunctive term itself — namely, the syntactic string “spherical bright fragrant juicy tropical fruit” — is not an icon but a symbol.  It has its place in a formal system of symbols, for example, a propositional calculus, where it would normally be interpreted as a logical conjunction of six elementary propositions, denoting anything in the universe of discourse having all six of the corresponding properties.  The symbol denotes objects which may be taken as icons of oranges by virtue of bearing those six properties.  But there are no objects denoted by the symbol which aren’t already oranges themselves.  Thus we observe a natural reduction in the denotation of the symbol, consisting in the absence of cases outside of oranges that have all the properties indicated.

The lack of any cases which are

is expressed by the implication

Taking this together with the Rule

But this reduces the Case

and so the Case is justified.

Viewed in the light of the above analysis, Peirce’s example of abductive reasoning exhibits an especially strong form of inference, almost deductive in character.  Do all abductive arguments take this form, or may there be weaker styles of abductive reasoning which enjoy their own levels of plausibility?  That must remain an open question at this point.