The main things to take away from the previous post are the following two ideas, one syntactic and one semantic:

The two kinds of connective operations are described as follows.

The two ways of mapping cactus structures to logical meanings are summarized in Table 3, which compares the existential and entitative interpretations of the basic cactus structures, in effect, the graphical constants and connectives.

Quickly recapping the discussion so far, we started with a data structure called an idea‑form flag and adopted it as a building block for constructing a species of graph-theoretic data structures called painted and rooted cacti.  We showed how to code the abstract forms of cacti into character strings called cactus expressions and how to parse the character strings into pointer structures in computer memory.

At this point we had to choose between two expository strategies.

A full account of Theme One’s operation would describe its use of cactus graphs in three distinct ways, called lexical, literal, and logical applications.  The more logical order would approach the lexical and literal tasks first.  That is because the program’s formal language learner must first acquire the vocabulary its propositional calculator interprets as logical variables.  The sequential learner operates at two levels, taking in sequences of characters it treats as strings or words plus sequences of words it treats as strands or sentences.

Finding ourselves more strongly attracted to the logical substance, however, we leave the matter of grammar to another time and turn to Theme One’s use of cactus graphs in its reasoning module to represent logical propositions on the order of Peirce’s alpha graphs and Spencer Brown’s calculus of indications.

Up till now we’ve been working to hammer out a two-edged sword of syntax, honing the syntax of cactus graphs and cactus expressions and turning it to use in taming the syntax of two-level formal languages.

But the purpose of a logical syntax is to support a logical semantics, which means, for starters, to bear interpretation as sentential signs capable of denoting objective propositions about a universe of objects.

One of the difficulties we face is that the words interpretation, meaning, semantics, and their ilk take on so many different meanings from one moment to the next of their use.  A dedicated neologician might be able to think up distinctive names for all the aspects of meaning and all the approaches to them that concern us, but I will do the best I can with the common lot of ambiguous terms, leaving it to context and intelligent interpreters to sort it out as much as possible.

The formal language of cacti is formed at such a high level of abstraction that its graphs bear at least two distinct interpretations as logical propositions.  The two interpretations concerning us here are descended from the ones C.S. Peirce called the entitative and the existential interpretations of his systems of graphical logics.

Table 1 illustrates the existential interpretation of cactus graphs and cactus expressions by providing English translations for a few of the most basic and commonly occurring forms.

Table 2 illustrates the entitative interpretation of cactus graphs and cactus expressions by providing English translations for a few of the most basic and commonly occurring forms.

Theory and Therapy of Representations • 4

Re: Theory and Therapy of Representations • 3
Re: Ontolog Forum • Paola Di Maio

JA:
What are the forces distorting our representations of what’s observed, what’s expected, and what’s intended?

PDM:
The short answer is …. the force behind all distortions is our own unenlightened mind, and all the shortfalls this comes with.

I think that’s true, we have to keep reflecting on the state of our personal enlightenments.  If we can do that without losing our heads and our systems thinking caps, there will be much we can do to promote the general Enlightenment of the State.

On both personal and general grounds we have a stake in the projects of self‑governing systems — whether it is possible for them to exist and what it takes for them to thrive in given environments.  Systems on that order have of course been studied from many points of view and at many levels of organization.  Whether we address them under the names of adaptive, cybernetic, error-correcting, intelligent, or optimal control systems they all must be capable to some degree of learning, reasoning, and self‑guidance.

Theory and Therapy of Representations • 3

Representation is a concept we find at the intersection of cybernetics, epistemology, logic, mathematics, psychology, and sociology.  In my studies it led me from math to psych and back again, with sidelong glances at the history of democratic governance.  Its time come round again, I find myself returning to the scenes of two recurring questions.

We do not live in axiom systems.  We do not live encased in languages, formal or natural.  There is no reason to think we will ever have exact and exhaustive theories of what’s out there, and the truth, as we know, is “out there”.  Peirce understood there are more truths in mathematics than are dreamt of in logic — and Gödel’s realism should have put the last nail in the coffin of logicism — but some ways of thinking just never get a clue.

That brings us to Question 1 —

Scene 2.  Theory and Therapy of Representations • 1

Statistics were originally the data a ship of state needed for stationkeeping and staying on course.  The Founders of the United States, like the Cybernauts of the Enlightenment they were, engineered a ship of state with checks and ballasts and error-controlled feedbacks for the sake of representing both reality and the will of the people.  In that connection Max Weber saw how a state’s accounting systems were intended as representations of realities its crew and passengers must observe or perish.

That brings us to Question 2 —

Theory and Therapy of Representations • 2

In a complex society, people making decisions and taking actions at places remote from you have the power to affect your life in significant ways.  Those people govern your life, they are your government, no matter what spheres of influence they inhabit, private or public.  The only way you get a choice in that governance is if there are paths of feedback permitting you to affect the life of those decision makers and action takers in significant ways.  That is what accountability, response-ability, and representative government are all about.

Naturally, some people are against that.

In the United States there has been a concerted campaign for as long as I can remember — but even more concerted since the Reagan Regime — to get the People to abdicate their hold on The Powers That Be and just let some anonymous corporate entity send us the bill after the fact.  They keep trying to con the People into thinking they can starve the beast, to limit government, when what they are really doing is feeding the beast of corporate control, weakening their own power over the forces that govern their lives.

That is the road to perdition as far as responsible government goes.  There is not much of anything one leader or one administration can do unsupported if the People do not constantly demand a government of, by, and for the People.

Theory and Therapy of Representations • 1

Posted on September 13, 2022 by Jon Awbrey
Again, in a ship, if a man were at liberty to do what he chose, but were devoid of mind and excellence in navigation (αρετης κυβερνητικης), do you perceive what must happen to him and his fellow sailors?

Re: Michael Harris • Mathematical Literacy and the Good Society

Statistics were originally the data a ship of state needed for stationkeeping and staying on course.  The Founders of the United States, like the Cybernauts of the Enlightenment they were, engineered a ship of state with checks and ballasts and error-controlled feedbacks for the sake of representing both reality and the will of the people.  In that connection Max Weber saw how a state’s accounting systems were intended as representations of realities its crew and passengers must observe or perish.

The question for today is —

Posted on September 8, 2022 by Jon Awbrey
Again, in a ship, if a man were at liberty to do what he chose, but were devoid of mind and excellence in navigation (αρετης κυβερνητικης), do you perceive what must happen to him and his fellow sailors?

This is a Survey of blog posts relating to Cybernetics.  It includes the selections and comments I’ve posted so far on Ashby’s Intro plus two series of reflections on the governance of social systems in light of cybernetic and semiotic principles.

Theory and Therapy of Representations • 5

I do not pretend to understand the moral universe;
the arc is a long one, my eye reaches but little ways;
I cannot calculate the curve and complete the figure by
the experience of sight;  I can divine it by conscience.
And from what I see I am sure it bends towards justice.

The arc of the moral universe may bend toward justice — there’s hope it will.
For the logic of laws to converge on justice may take some doing on our part.

Theme One Program • Jets and Sharks 3

Given a representation of the Jets and Sharks universe in computer memory, we naturally want to see if the memory serves to supply the facts a well-constructed data base should.

In their PDP Handbook presentation of the Jets and Sharks example, McClelland and Rumelhart suggest several exercises for the reader to explore the performance of their neural pool memory model on the tasks of retrieval and generalization (Exercise 2.1).

Using cactus graphs or minimal negations to implement pools of mutually inhibitory neurons lends itself to neural architectures on a substantially different foundation from the garden variety connectionist models.  At a high level of abstraction, however, there is enough homology between the two orders to compare their performance on many of the same tasks.  With that in mind, I tried Theme One on a number of examples like the ones suggested by McClelland and Rumelhart.

What follows is a brief discussion of two examples as given in the original User Guide.  Next time I’ll fill in more details about the examples and discuss their bearing on the larger issues at hand.

With a query on the name “ken” we obtain the following output, giving all the features associated with Ken. 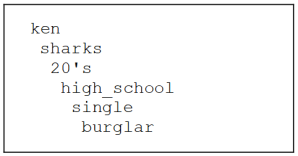 With a query on the two features “college” and “sharks” we obtain the following outline of all features satisfying those constraints. 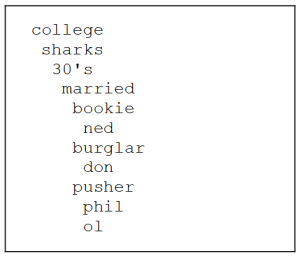 From this we discover all college Sharks are 30‑something and married.  Further, we have a complete listing of their names broken down by occupation.