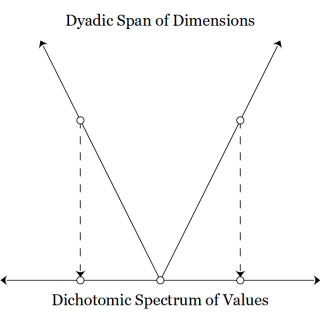 Many thanks for your thoughtful reply.  I copied a transcript to my blog to take up first thing next year.  Here’s hoping we all have a better one!

CJ:
I think what you have is sound, and can be described in a number of ways.  In years past in seeking ways to both qualify and quantify variety in systems I characterized this distinction as between “dimensional variety” and “cardinal variety”.  Thankfully, this seems straightforward from a mathematical perspective, namely in a standard relational system

are dimensions (something that can vary), typically cast as sets, so that

is the dimensional variety (number of dimensions,

is the cardinal variety (cardinality of dimension

-tonicity, actually?)).  One might think of the two most classic examples:
There’s another quantity you didn’t mention, which is the overall “variety” or size of the system, so

which is itself a well-formed expression (only) if there are a finite number of finite dimensions.