For example, consider a proposition of the form

graphed as two letters attached to a root node, as shown below.

Written as a string, this is just the concatenation

may be taken as a boolean function

having the abstract type

is read in such a way that

Imagine yourself standing in a fixed cell of the corresponding venn diagram, say, the cell where the proposition

is true, as shown in the following Figure.

Now ask yourself:  What is the value of the proposition

at a distance of

where you are standing?

Don’t think about it — just compute:

and its corresponding graph arise by replacing

in the boolean product or logical conjunction

and writing the result in the two dialects of cactus syntax.  This follows because the boolean sum

is equivalent to the logical operation of exclusive disjunction, which parses to a cactus graph of the following form.

Next question:  What is the difference between the value of the proposition

over there, at a distance of

from where you are standing, and the value of the proposition

where you are, all expressed in the form of a general formula, of course?  The answer takes the following form. 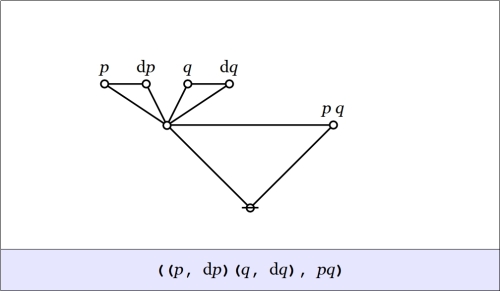 There is one thing I ought to mention at this point:  Computed over

plus and minus are identical operations.  This will make the relation between the differential and the integral parts of the appropriate calculus slightly stranger than usual, but we will get into that later.

Last question, for now:  What is the value of this expression from your current standpoint, that is, evaluated at the point where

in the cactus graph amounts to erasing the labels

And this is equivalent to the following graph:

It will be necessary to develop a more refined analysis of that statement directly, but that is roughly the nub of it.

If the form of the above statement reminds you of De Morgan’s rule, it is no accident, as differentiation and negation turn out to be closely related operations.  Indeed, one can find discussions of logical difference calculus in the Boole–De Morgan correspondence and Peirce also made use of differential operators in a logical context, but the exploration of these ideas has been hampered by a number of factors, not the least of which has been the lack of a syntax adequate to handle the complexity of expressions evolving in the process.