We come to the last of Peirce’s statements about the “number of” function, first quoted in Selection 11 and again with the whole set in Comment 11.2.

The conception of multiplication we have adopted is that of the application of one relation to another.  […]

Even ordinary numerical multiplication involves the same idea, for

is a pair of triplets, and

is a triplet of pairs, where “triplet of” and “pair of” are evidently relatives.

If we have an equation of the form

and there are just as many x’s per y as there are, per things, things of the universe, then we have also the arithmetical equation,

Peirce here observes what may be called a contingent morphism.  On a condition he gives, the mapping of logical terms to their corresponding numbers preserves the multiplication of relative terms after the fashion of the following formula.

The condition for this to hold is expressed by Peirce in the following manner.

There are just as many x’s per y as there are, per things, things of the universe.

Peirce’s phrasing on this point is admittedly hard to parse but if we stick with his story to the end I think we can see what he’s driving at.

Now that is something we can sink our teeth into and trace the bigraph representation of the situation.  It will help to recall our first examination of the “tooth of” relation and to adjust the picture we sketched of it on that occasion.

contains all the teeth and

contains all the people under discussion.

To make the case as simple as possible and still cover the point, suppose there are just four people in our universe of discourse and just two of them are French.  The bigraph product below shows the pertinent facts of the case.

In this picture the order of relational composition flows down the page.  For convenience in composing relations, the absolute term

which in turn determines the idempotent representation of Frenchmen as a subset of mankind,

By way of a legend for the Figure, we have the following data. 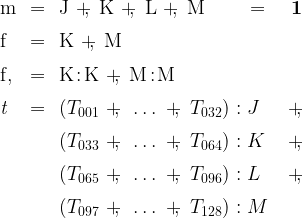 We can use this picture to make sense of Peirce’s statement, repeated below.

In statistical terms, Peirce is saying this:  If the population of Frenchmen is a fair sample of the general population with regard to the factor of dentition, then the morphic equation,

whose transpose gives the equation,

is every bit as true as the defining equation in this circumstance, namely,