All Process, No Paradox • 2

These are the forms of time, which imitates eternity and revolves according to a law of number.

As serendipity would have it, Lou Kauffman, who knows a lot about the lines of inquiry Charles Sanders Peirce and George Spencer Brown pursued into graphical syntaxes for logic, just last month opened a blog and his very first post touched on perennial questions of logic and time — Logos and Chronos — puzzling the wits of everyone who has thought about them for as long as anyone can remember.  Just locally and recently these questions have arisen in the following contexts:

Kauffman’s treatment of logic, paradox, time, and imaginary truth values led me to make the following comments I think are very close to what I’d been struggling to say before.

Let me get some notational matters out of the way before continuing.

for a generic 2-point set, usually

and typically but not always interpreted for logic so that

I use “teletype” parentheses

for negation, so that

As long as we’re reading

as a boolean variable

is not paradoxical but simply false.  As an algebraic structure

can be extended in many ways but it remains a separate question what sort of application, if any, such extensions might have to the normative science of logic.

On the other hand, the assignment statement

makes perfect sense in computational contexts.  The effect of the assignment operation on the value of the variable

is commonly expressed in time series notation as

and the same change is expressed even more succinctly by defining

Now suppose we are observing the time evolution of a system

with a boolean state variable

and what we observe is the following time series.

Computing the first differences we get:

Computing the second differences we get: 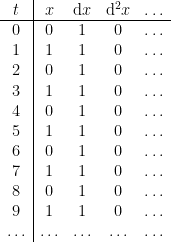 This leads to thinking of the system

as having an extended state

and this additional language gives us the facility of describing state transitions in terms of the various orders of differences.  For example, the rule

can now be expressed by the rule

The following article has a few more examples along these lines.

6 Responses to All Process, No Paradox • 2