In the full theory of sign relations the connotative aspect of meaning includes the links a sign has to affects, concepts, ideas, impressions, intentions, and the whole realm of an interpretive agent’s mental states and allied activities, broadly encompassing intellectual associations, emotional impressions, motivational impulses, and real conduct.  Taken at the full, in the natural setting of semiotic phenomena, this complex system of references is unlikely ever to find itself mapped in much detail, much less completely formalized, but the tangible warp of its accumulated mass is commonly alluded to as the connotative import of language.

Information about the connotative aspect of meaning is obtained from

by taking its projection on the sign-interpretant plane.  We may visualize this as the “shadow”

and the interpretant domain

variously written in any of the forms,

is defined as follows.

respectively.  The rows of each Table list the ordered pairs

in the corresponding projections, 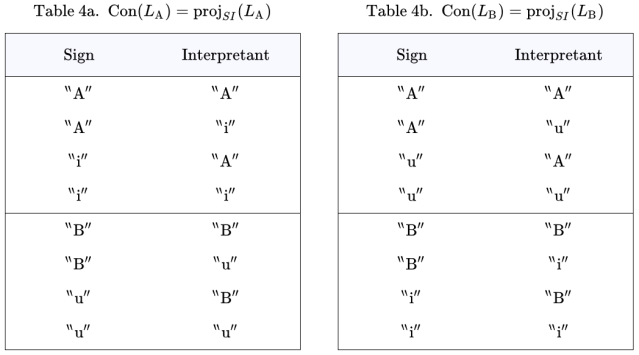