I need to return to my study of Peirce’s 1870 Logic Of Relatives, and I thought it might be more pleasant to do that on my blog than to hermit away on the wiki where I last left off.

Peirce’s text employs lower case letters for logical terms of general reference and upper case letters for logical terms of individual reference.  General terms fall into types, for example, absolute terms, dyadic relative terms, or higher adic relative terms, and Peirce employs different typefaces to distinguish these.  The following Tables indicate the typefaces that are used in the text below for Peirce’s examples of general terms. 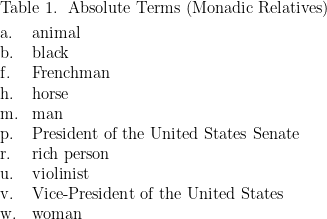 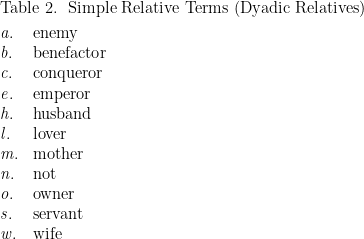 falling under the general term

The path to understanding Peirce’s system and its wider implications for logic can be smoothed by paraphrasing his notations in a variety of contemporary mathematical formalisms, while preserving the semantics as much as possible.  Remaining faithful to Peirce’s orthography while adding parallel sets of stylistic conventions will, however, demand close attention to typography-in-context.  Current style sheets for mathematical texts specify italics for mathematical variables, with upper case letters for sets and lower case letters for individuals.  So we need to keep an eye out for the difference between the individual

as we pass between the two styles of text.