To say a relative term “imparts a relation” is to say it conveys information about the space of tuples in a cartesian product, that is, it determines a particular subset of that space.  When we study the combinations of relative terms, from the most elementary forms of composition to the most complex patterns of correlation, we are considering the ways those constraints, determinations, and informations, as imparted by relative terms, are compounded in the formation of syntax.

Let us go back and look more carefully at just how it happens that Peirce’s adjacent terms and subjacent indices manage to impart their respective measures of information about relations.  Consider the examples shown in Figures 7 and 8, where connecting lines of identity have been drawn between the corresponding occurrences of the subjacent marks of reference:

One way to approach the problem of “information fusion” in Peirce’s syntax is to soften the distinction between adjacent terms and subjacent signs and treat the types of constraints they separately signify more on a par with each other.  To that purpose, let us consider a way of thinking about relational composition that emphasizes the set-theoretic constraints involved in the construction of a composite relation.

For example, given the relations

The way to read Table 9 is to imagine you are playing a game which involves placing tokens on the squares of a board marked in just that way.  The rules are you have to place a single token on each marked square in the middle of the board in such a way that all the indicated constraints are satisfied.  That is, you have to place a token whose denomination is a value in the set

on each of the squares marked

and similarly for the squares marked

Furthermore, the tokens placed in each row and column have to obey the relational constraints indicated at the heads of the corresponding row and column.  Thus, the two tokens from

have to denote the very same value from

while the pairs of tokens on the rows marked

are required to denote elements in the relations

The upshot is, when all that has been done, when the

relations are satisfied, then the row marked

Figure 10 shows a different way of viewing the same situation. 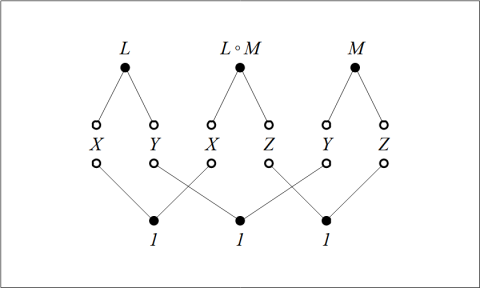