The enlargement or shift operator

exhibits a wealth of interesting and useful properties in its own right, so it pays to examine a few of the more salient features playing out on the surface of our initial example,

A suitably generic definition of the extended universe of discourse is afforded by the following set-up.

For a proposition of the form

the (first order) enlargement of

defined by the following equation.

are boolean variables of the same type as the ordinary variables

In the example of logical conjunction,

is formulated as follows.

Given that this expression uses nothing more than the boolean ring operations of addition and multiplication, it is permissible to “multiply things out” in the usual manner to arrive at the following result.

To understand what the enlarged or shifted proposition means in logical terms, it serves to go back and analyze the above expression for

in the same way we did for

To that end, the value of

may be computed in graphical fashion as shown below.

Here is a summary of the result, illustrated by means of a digraph picture, where the “no change” element

is drawn as a loop at the point 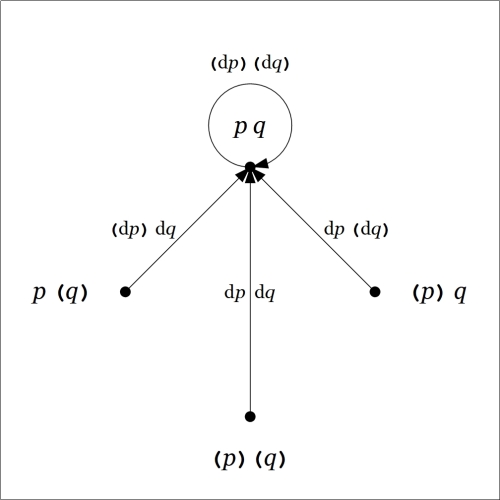 We may understand the enlarged proposition

from the points of the universe