It is one of the rules of my system of general harmony, that the present is big with the future, and that he who sees all sees in that which is that which shall be.

We continue with the differential analysis of the proposition in Example 1.

Like any moderately complex proposition, the difference map of a proposition has many equivalent logical expressions and can be read in many different ways.

computed in Post 9 and further discussed in Post 10 is shown again below with the terms arranged by number of positive differential features, from lowest to highest.

may be obtained from the table below by multiplying the base factor at the head of each column by the differential factor that appears beneath it in the body of the table.

The full boolean expansion of

may be condensed to a degree by collecting terms that share the same base factors, as shown in the following display: 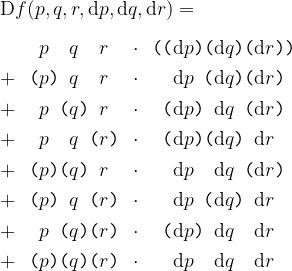 This amounts to summing terms along columns of the previous table, as shown at the bottom margin of the next table: 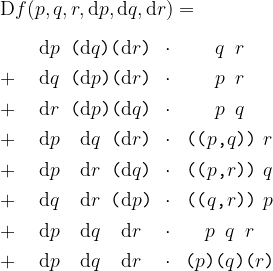 This is roughly what one would get by summing along rows of the previous tables.