Peirce’s comma operation, in its application to an absolute term, is tantamount to the representation of that term’s denotation as an idempotent transformation, which is commonly represented as a diagonal matrix. Hence the alternate name, diagonal extension.

is given by the abstract condition that

but elements like these are commonly encountered in more concrete circumstances, acting as operators or transformations on other sets or spaces, and in that action they will often be represented as matrices of coefficients.

Let’s see how this looks in the matrix and graph pictures of absolute and relative terms.

Previously, we represented absolute terms as column arrays. The above four terms are given by the columns of the following table:

The types of graphs known as bigraphs or bipartite graphs can be used to picture simple relative terms, dyadic relations, and their corresponding logical matrices. One way to bring absolute terms and their corresponding sets of individuals into the bigraph picture is to mark the nodes in some way, for example, hollow nodes for non-members and filled nodes for members of the indicated set, as shown below: 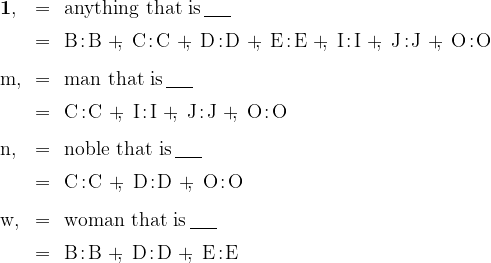 Naturally enough, the diagonal extensions are represented by diagonal matrices: 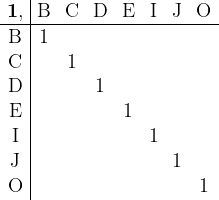 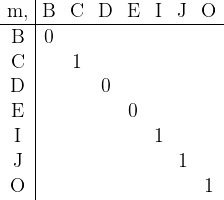 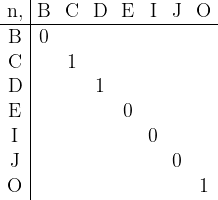 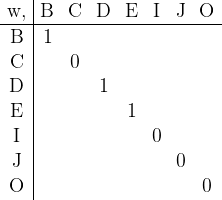 Cast into the bigraph picture of dyadic relations, the diagonal extension of an absolute term takes on a very distinctive sort of “straight-laced” character: